I started throwing seriously in 2005. I suppose I have always been interested in throwing things but didn’t really know how to. 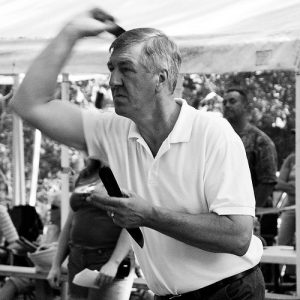 Finding the Great Throwzini‘s internet site pointed me in the right direction.

After some months of throwing on my own I wanted to learn from others so I found the International Knife Throwers’ Hall of Fame (IKTHOF ), based in Austin, Texas, on the internet. They had a tournament in October 2006 so I went to learn.

In 2007 I played the part of a Turkish knife thrower in Yorkshire Television’s “Heartbeat”.

In 2008 I was the technical advisor and knife throwing expert for the History Channel production of Ancient Discoveries ” Record Breakers ” The Shongo, the African Throwing Knife.

Also in 2008 I taught  Lenny Henry to throw knives for his part in the West End Production of Othello.

In 2012 I became involved with the National Scouts Association, Introducing them to safe tomahawk throwing. Since then lots of Scout leaders have taken up the sport under my instruction. This is one of my top achievements as I know lots of other people are now taking up and enjoying the safe sport of throwing.

2015 Eurothrowers World Championships, Huthwaite, UK
This was a very special event because it was the first World Championship event held in and organised by the UK. Very hard work but something Richard and I had been working towards since the beginning of Knife Club. Qualified for World Championship Axe and Knife and Team GB came 3rd overall!

2017 1st UK National Tournament, Huthwaite, UK
The first ever true UK National championship for knife and tomahawk throwing. This was held at Woodend target Sports, Huthwaite, Notts, by the kind permission of Daniel Mosley. 54 of us joined together for the weekend and celebrated our love of throwing.