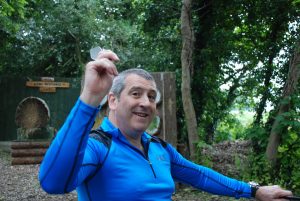 My first proper throw was at Pontefract on the 15th May 2016. That was the start of an obsession with all target sports although throwing remains my primary passion.

Within 2 weeks I had scavenged carboard for targets and was throwing everything from 5” nails to homemade bagakay. By the end of June, I had read most available books on the subject, developed a learning strategy, got JT throwers, proper home targets and joined KATTA.

At the end of Summer 2016 I had attended half a KATTA tournament and the Viking day, been introduced to double bit axe and obtained my first “no-spin” knives and shuriken. I finally joined the 21st Century via the FB group and my collection of throwing implements became notorious.

There is no way to really progress in throwing without other throwers so by the end of 2016 I had travelled to Woodend and Hull, joining the Field Archers and Warriors and shared double bit experience with the Chuckers as well as weekly Sundays at Pontefract.

Injury and illness slowed things down in Winter but we had a positive 2nd of January meet at the Pontefract range which reminded me of how lucky I was to have access to help and support from John, George, Richard, Col, Graham and Jules. In February I visited Austin, home of IKTHOF, the travel time giving me the chance to absorb the Thronin podcasts and crank up my research.

My first real competition experience was the inaugural KATTA National Championship at Woodend in June 2017 where I helped organise the no-spin and double bit events. It was a bittersweet experience ranging from disastrous (conventional knives score worse than 2016, no-spin less than half practice scores) through good (new quick draw technique worked, 5th in double bit) to outstanding (medals). My throwing name arrived, a consequence of my unusual approach to the sport.

Four days later and a year after taking up throwing, after a crazy journey across Germany I was lining up at the first World Double Bit Championship.

2016 3rd Viking Charity Throw
Decided I wanted to be competent to compete in every discipline.

2016 7th KATTA tournament
First day only, learned how to score! 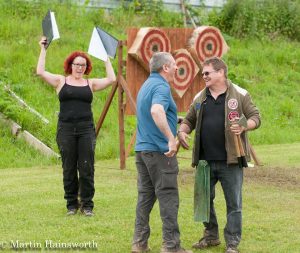 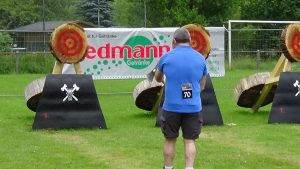